By late September some 50 per cent of the world’s population had received at least one dose of a COVID-19 vaccine and over 6 billion doses had been administered. Yet only 2 per cent of people in low-income countries have received at least one dose. Some key natural advantages stemming from income levels and demography have given great advantage to large, poor nations in their levels of Covidity compared to rich nations of Europe and North America. This may well be nullified by the present failure of the vaccination program to become low-cost and global. The latter effect will be of no good to anyone.

The five rich nations of Table 1 below illustrate one perspective on the state of play. 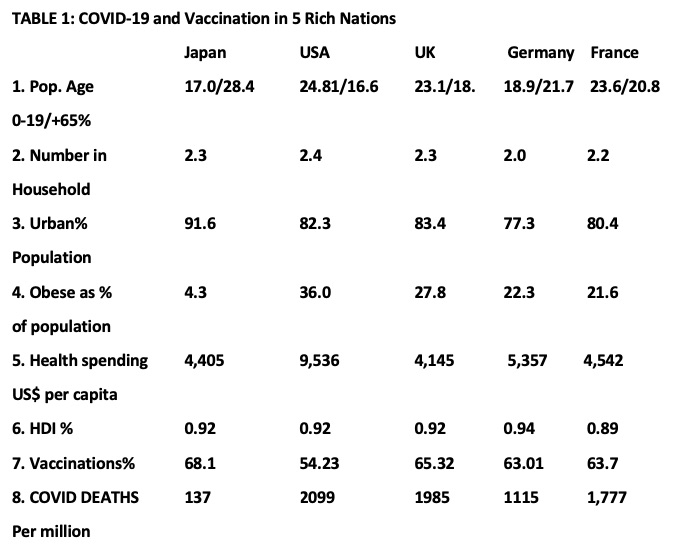 It becomes immediately obvious that four of these nations share a very high level of Covidity, ranging from 1,115 deaths per million to 2,099 deaths per million for the period from the outset of the pandemic to the present time. For the world at large, COVID-19 deaths for September 22 were 607 per million, so on the basis of official figures, deaths from COVID-19 per capita in the USA are well over three times the global average. They are also high-income nations and share correspondingly similar attributes in terms of age, household sizes, degrees of urbanity, health expenditure, obesity, and Human Development Indicators (Rows 1-6).

Of greatest importance is the age distribution associated with high incomes—they have a small proportion of youngsters in their populations, ranging in Table 1 from 17-25 per cent, and a large number of older folk over 65 years of age, ranging here from 19 per cent to 29 per cent. In addition, these rich nations have a low level of people per individual households (ranging 2-2.4), a high proportion of people living in cities and very high levels of obesity. There is every reason to believe that these elements are causally associated and have led to the high levels of rich-nation Covidity.

Low incomes have been historically associated with a high proportion of youngsters and a low proportion of older people in all nations of the world. In poorer nations children are considered assets from an early age, medicine is relatively undeveloped so that individuals do not live long. In rich nations improved medicine, housing and environmental conditions mean that most families curtail the number of children as older members live longer, trading off the work of children for the higher incomes of smaller families. Thus, the global tendency has been that this particular pandemic, which is mostly doing little harm directly to babies, children and youth but homing in on the elderly and those with immune deficiencies, has hit rich nations very hard on purely socio-structural grounds, with COVID-19 policy measures being of lesser significance.

Other factors at work

Furthermore, other factors work in the same direction. Rich nations may spend a large amount on health care and have high levels of infrastructural development (e.g., education, Human Development Index, Row 6), as well as smaller, more compacted households, but they also have very high levels of obesity and urbanism, both of which are almost certainly linked to COVID-19 infection and death. This all explains the high levels of Covidity regardless of exact policy measures of governments.

However, Japan provides a striking exception with much lower Covidity levels, 137 deaths per million, broadly comparable with Pakistan and India. It has been natural enough for the Japanese and the world press to explain this mostly in terms of more efficient Japanese COVID-19 policies. This cannot be dismissed but note should now be taken of Row 1, which shows that although Japanese age structures are comparable with the other four rich nations, its levels of obesity (Row 4) are far lower, and this may well be a factor to consider alongside policy (see below). Maintaining many traditional behavioural norms, including food culture, despite the transition to industrial capitalism may well have been important to low Covidity.

TABLE 2 below offers another perspective on the global situation. 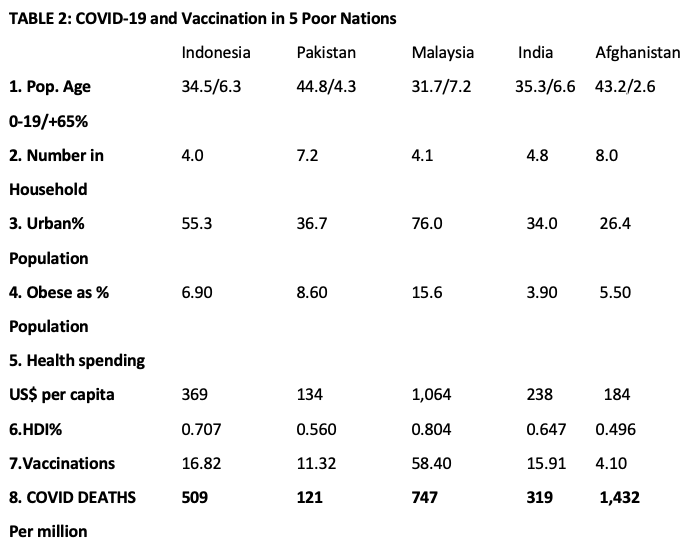 Much lower income in this group skews the population age distribution (Row 1) strongly towards youth and away from old age, thus, the low COVID-19 death figures (Row 8). As dramatic are the much, much lower figures for obesity, ranging from 3.9 to 8.6 of total populations. We might reasonably hazard that since the inception of the COVID-19 virus, factors such as high health expenditure, large investments in infrastructure and COVID policies, and much more recent unfolding of huge vaccination programs have NOT even yet succeeded in bringing the Covidity levels of rich nations down to those of the poor in proper per capita terms.

But vaccination has turned the tide in rich nations whereas it is almost invisible in the very poor. So, within months from now, the rare natural advantages of poverty may well be nullified by the failure of the vaccination program to become low-cost and global.

What can be done now?

Any discussion of this must surely cover points such as the following. First, China has for some time been offering free vaccinations to other nations, often to little avail among politicians and media internationally. But the estimated two billion-plus vaccinations that China can make available would be global game changers and should be encouraged in terms of the returns to China in increased global status at relatively little cost—especially if focused on Africa, the regions of the Belt and Road project, and South Asia. The more that might be gained in soft power through vaccine distribution the more likely it is that China will include distribution and training services, as well as personnel.

Second, an international stance on vaccine aid as development aid (in ODA budgets and so on) will inhibit nations from pulling back from foreign aid in the next months of pandemic recovery in the name of a need for national savings and a reticence to aid such nations as Afghanistan for reasons that are primarily political. Lowering of aid to well below the 0.7 per cent of GDP that has previously been an agreed reasonable level (e.g., for Germany, UK, Sweden, Norway, Turkey, Denmark, UAE) might perhaps be seen as quite short-term, but is potentially devastating in terms of the spread of new COVID varieties and weakening of global pandemic economic recovery.

Third, international institutions should be advocating global vaccination aid as exemplary of the world system countering the environmental disasters that it has been creating and is now supposedly addressing. Vaccination aid is not just a matter of rich nations protecting their commercial backyards (trading relations).

Fourth, urgently needed is the development of more cooperative research on the best way to fund and organise coherent programs of public health funding, scientific research, and socio-medical investigation—for instance concerning the global implications of rich-nation obesity. Post-pandemic global economic relations that are less dependent on failing international institutions (the UN has not used its power and influence effectively during the pandemic) and leading economies (the USA is not about to become an efficient political economy) may help serve this purpose. The Pacific region is growing far faster than the Atlantic economies.

Fifth, obesity might soon be recognised as a vitally strategic global element in explaining varying COVID-19 levels between rich and poor.  Furthermore, obesity may serve to spread serious COVID illness to lower age groups. Much more work needs to be done on the science of the seemingly fairly direct link between obesity and COVID sufferance. But the statistics do tend to signal it out as a pertinent factor with some independence—that is, as shown by Japan, high incomes per capita are a major element in high obesity, but this is not invariable.

If we broaden to East Asia more generally, nations such as South Korea and Taiwan have high incomes but their figures of deaths per million by COVID-19 lie at 32 per million for South Korea and 13 for Singapore, and their obesity levels are at the very low levels of 4.7 and 6.1 respectively. Again, the per capita incomes of Turkey and Iran are around only one-third of those of Japan or South Korea, but they have much higher obesity levels than India (around 10 times higher) and much higher deaths by COVID-19 (three to six times, respectively). Gross health expenditure seems to be no predictor of Covidity levels, obesity serves far better. Culture may matter in unexpected ways.

Sixth and finally, it seems clear that China and Russia have nothing to gain from allowing the development of radical Islam along their own borders in Afghanistan and the region. On such issues as drug-running through Afghanistan, it should be a natural alliance between Russia, China and Middle Eastern nations to fight against this as a practical and ideological common threat—these are nations and cultures whose most basic long-term interests lie in reducing religious extremity, in removing drug trafficking from their political economies, and in becoming a basis for regional cooperation that might well begin with the fight against COVID-19 through spreading vaccination from the borders of China, Russia and Afghanistan into the rest of Asia and the Middle East.

Forging this would stand as the greatest soft-power process that one could envisage as leading to a process of post-pandemic global reconstruction that does not wait upon a presently disabled USA to put its own internal political house in order.

Russian tourists found dead in a hotel in Albania

What is the legacy of #EndSARS?

Iraq: the Elections are Over, but the Struggle Continues

What did we learn from South Africa’s local elections?