Globally, one in every 10 girls and women who experienced FGM is in Nigeria. The country has significant gender disparities in politics, economics, and education. Discriminatory practices, violence against women and girls, and gender stereotypes all hamper progress toward gender equality.

FGM and other forms of gender-based violence became punishable offences with the Violence Against Person Prohibition Act in Nigeria in 2015. However, the practice continues for several reasons.

Global Voices (GV): Why is FGM practiced and how does it affect the health and well-being of girls and women?

Dr. Chris Ugwu: In Nigeria, the zones with the highest FGM prevalence rate are the southwest and the southeast. There are so many reasons FGM is practiced in Nigeria. It ranges from cultural reasons to it being used to curb illicit sexual appetites of women and girls in the country. But to this question, we will dwell on some reasons it is practiced in Enugu in southeastern Nigeria. In Enugu State, FGM is normally practiced because of the patriarchal system, which ensures male dominance over women. It is a way in which the male folks subject and impose themselves on women.

Another reason is that FGM is also often considered a religious/cultural obligation, for example, rite of passage into adulthood, Female Genital Cutting as part of a naming ceremony, etc. In most communities in Enugu State, FGM is usually carried out on the eighth day after birth, to coincide with the child’s naming ceremony, which is a festive event with gifts and refreshments. The naming and cutting are linked. It has also been discovered that poor mothers cannot openly resist their girl children from being mutilated because it would also mean that there is no naming ceremony. All this has helped this practice to thrive in Enugu State. 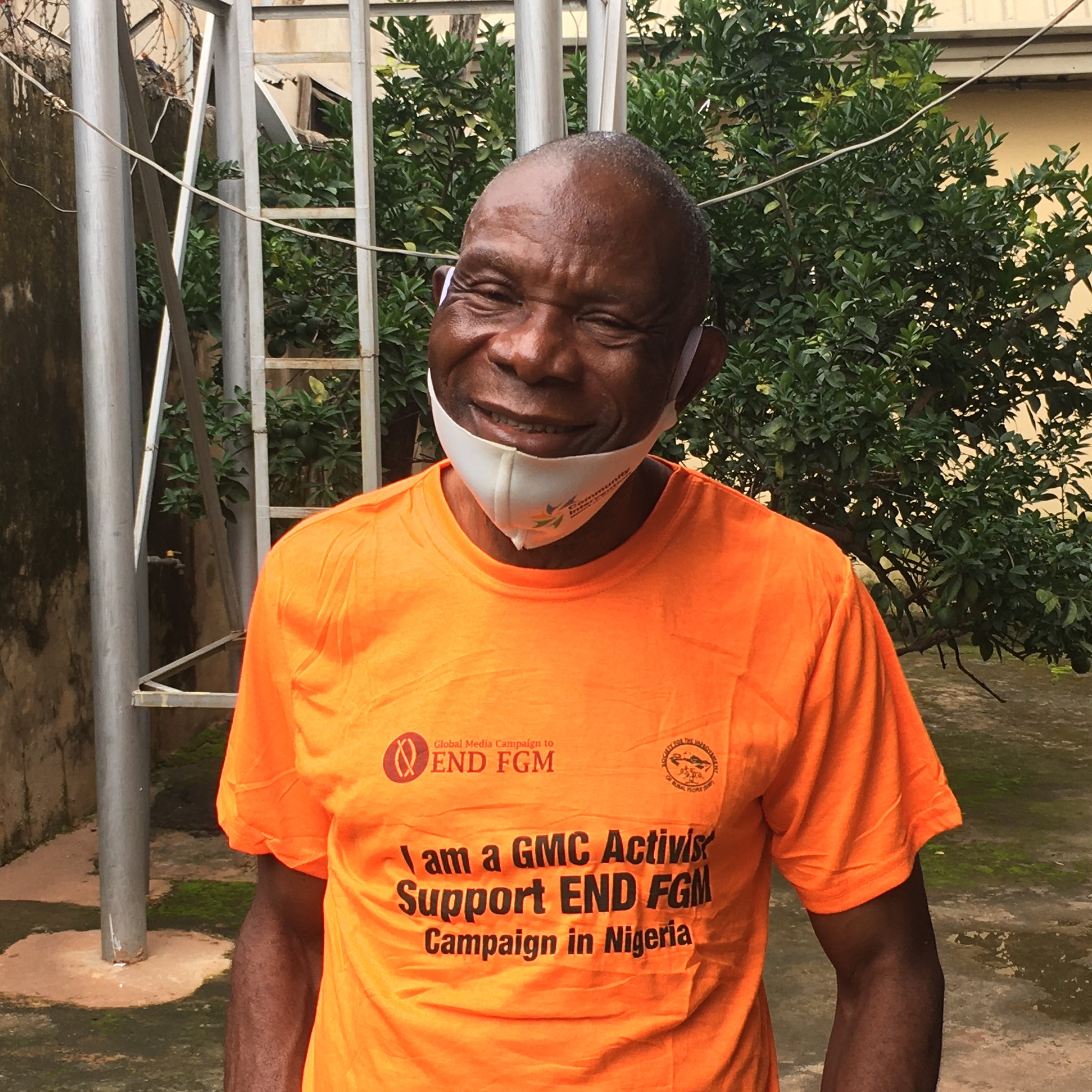 Dr Chris Ugwu, taking part in one of the campaigns SIRP organised in Nigeria.

GV: What has been the effect of FGM on women’s and girls’ education in Nigeria?

Dr. Ugwu: The effects of FGM on women’s health cannot be overemphasized. This is because it leads to excruciating pains, infections, excessive bleeding, urinary incontinence, complications in childbirth, trauma, and sometimes even death. Also, it influences the girl child’s education. FGM serves as a precursor to the girl child’s early marriage. This means she has to drop out of school to cater to her family. It invariably affects her chances of getting good and well-paying jobs in the future.

GV: The Society for the Improvement of Rural People (SIRP) survey shows 95% of respondents had never heard that FGM became a punishable offence in Nigeria. What do you have to say about it?

Dr. Ugwu: This is something that we are not proud of here in Nigeria because without this knowledge, we have seen families, and communities emboldened to continue the practice. It is indeed so disheartening. So, what we are doing is to take this knowledge to various communities here in Nigeria. We have been doing this for over three years now and we will continue to do this. Currently, we are implementing an End FGM project in Akwuke with the support of Feed the Minds (UK). In this project, we ensure that the community members are sensitised to the Violence against Persons Prohibition Law (VAPP Law) of the Enugu State, which prohibits the practice of FGM in Nigeria.

GV: You have a lot of experience in working with local communities. How is the local society changing in terms of practicing FGM?

Dr. Ugwu: It is so beautiful to watch society change. This is because we are now seeing families and communities that are now changing their mindsets and attitudes about this practice. They are now openly and publicly denouncing and prohibiting this practice. We have seen this so far in some communities like Awgu, Okpanku, and Oduma here in Enugu State. One thing that has helped in all this is our approach, which involves the use of non-judgmental, open dialogue. It ensures that we have an open, non-judgmental, and constructive discussion with various community members.

GV: What is your approach to ending FGM in Nigeria and what prevention measures are you putting in place?

Dr. Ugwu: Our approach is rooted in the UNICEF 6 Elements of FGM Abandonment. This approach is a multi-pronged one that involves the use of non-judgmental, open dialogue, community acceptance, the media, Laws, and, of course, the next generation.

We are currently implementing a 12-month End FGM project in Akwuke community of Enugu State, Nigeria. We already have conducted many trainings, workshops, and radio programmes and started seeing some positive outcomes. We hope we will create change that will have a lasting impact.

How the U.S. government hides its being a dictatorship

Feminism, sovereignty, and the pan-African project